Mexico is facing a crisis of Human Rights violations, corruption, and impunity.

This diagnosis, first suggested by civil society, has now been adopted by eminent Mexican political actors and by the most important international human rights organizations, ranging from the Inter-American Commision on Human Rights (IACHR) to the Office of the United Nations High Comissioner for Human Rights (OHCHR). In recent years, especially after the events of 2014 —Tlatlaya, the Mexican President’s “White House”, Ayotzinapa—, which unveiled the severity of this crisis, the topic of how to reverse the state of chronic impunity of the country has been widely discussed in Mexico. Now we know that this is only possible when two gears engage: political will and the development of institutional capability to investigate.

Political will is the most essential element, yet it is the scarcest in our country. Mexico has not demonstrated the political will to investigate and punish criminals with political power, who either commit human rights violations or the offense of corruption. Since impunity is agreed upon by preponderant political and economic actors, this pronounced deficiency of justice will only change when society creates an environment of pressure that modifies the current power distribution in Mexico, thus strengthening justice.

But even if political will to reverse impunity emerges, the lack of legal system capabilities remains. The thousands of legal cases accumulated in files lacking contextual analysis in places where technology is not used, in need of macro-level perspectives of criminal investigation, conducted by prosecutors who investigate behind a desk, will not be changed overnight by the will of any government. Hence, there is a need to strengthen the institutional capability to investigate. This is especially true for the investigation of gross human rights violations: cases of torture, executions and disappearances are not adequately investigated in Mexico.

After over a year of working with the Mexican legal system, the Interdisciplinary Group of Independent Experts (IGIE), appointed by the IACHR to follow up on the Ayotzinapa case, identified some structural mechanisms that allow impunity when gross human rights violations are committed: deficiencies in access to justice that not only undermine the investigation of the events of Iguala, but are also part of the everyday reality of Mexican legal institutions.

Based on the Ayotzinapa Report II. Steps Forward and New Conclusions on the Investigation, Search and Care for Victims, this publication condenses the IGIE’s diagnosis regarding the impunity mechanisms that explain the inefficiency of criminal investigations and includes a chart that shows the necessary modifications to the Mexican legal system in order to reverse the prevailing situation. We have adjusted the original report to reach a wider audience and, on occasions, we have complemented their observations with our own, which arise from the 30-year-experience of Center Prodh. In addition, we have summarized each of the items to address them briefly.

We publish this report with the conviction that overcoming impunity in Mexico is not only urgent: it is also possible. 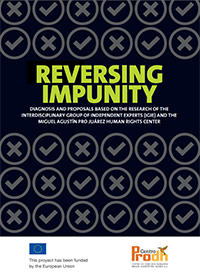