In the present Amicus Curiae, we present arguments on the unconstitutionality and unconventionality of various articles of the secondary laws related to the National Guard.

Regarding the National Guard Law, we argue that Article 9, sections III, IV, V, XVIII, XXVI, XXIX, XXXVIII, and XXXII, as well as Articles 100, 102, 103, 104, 105, and 106, are unconstitutional and in violation of international treaties, given that they confuse the fields of prevention and investigation and give the National Guard the power to investigate crimes, despite the fact that it is a militarized force.

Moreover, Article 9, sections XXXIII, XXXV, and XXXVI is also unconstitutional and unconventional given that it endows the National Guard with powers in immigration matters even though, as previously stated, it is a militarized body.

Furthermore, the deficiencies of article 60, section V, are also demonstrated by the fact that it considers the crimes of torture, cruel, inhuman or degrading treatment, and enforced disappearance to be non-serious offenses.

Regarding the National Law on the Registry of Detentions, we highlight the unconstitutionality and unconventionality of Article 19 and the Fifth Transitory Article, considering that they generate legal uncertainty surrounding the Armed Forces’ obligation to register detentions.

Finally, regarding the National Law on the Use of Force, we demonstrate the unconstitutionality and unconventionality of Articles 1, 3, 4, 6, and 9 due to the incorrect incorporation of internationally recognized principles on the use of force.

We also draw attention to the problems of Articles 6 and 36, due to their deficient regulation of the use of lethal force.

Moreover, we note the shortcomings of Article 27, paragraph 1, and Article 28, insomuch as they authorize the use of lethal force against violent protests.

Finally, we point out the particular omission in this Law due to its failure to comply with the order of the Inter-American Court of Human Rights in the Atenco case, regarding the creation of an Independent Observatory to monitor police forces.

Center Prodh’s Amicus Curiae has been presented to Mexico’s Supreme Court (SCJN, by its Spanish acronym).

Check the Amicus Curiae presented by the Center Prodh. (Spanish Only) 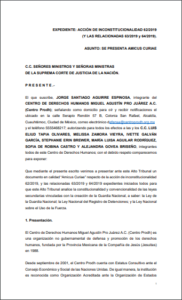