The transition to a new ruling party in Mexicos federal government gave rise to enormous expectations about the possibility of advancing much needed changes in Mexico. Thus far, with respect to human rights, the result has been mixed, with examples both of positive actions aimed at reversing the persistent human rights crisis in the country, as well as actions in the opposite direction.

Moreover, some of the cases that we have been accompanying for various years are beginning to advance – such as the Ayotzinapa and Pasta de Conchos cases.

These measures contrast with other, negative actions, such as: the perpetuation of the militarization of domestic security efforts by way of the newly-created National Guard and the concerning new protagonism of the military in public life; the toughening of migration policies; regressive reforms that have amplified mandatory pretrial detention; and the mismanagement of designation processes for the Supreme Court and the National Human Rights Commission.

The present issue of Focus explores these contrasts, concentrating on the actions of the new administration in the face of grave human rights violations and seeking to prioritize data and analysis over the partisan discourse that predominates in the current, polarized national public conversation. 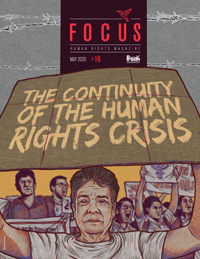