The human rights crisis that has plagued Mexico, aggravated by the so-called “War on Drugs”, has produced tens of thousands of victims of state and criminal violence –and, particularly, violence within the intersection between the two– which translates into an immeasurable number of broken lives and suffering.

This, however, is not the only face of the crisis. Many of these victims and their families (who are victims as well) have become activists in the search for their missing relatives, legal advisers, and organizers in light of the authorities’ inaction and impunity. In conjunction with civil society organizations, journalists, and indigenous communities in resistance, these groups constitute the widely diverse human rights movement.

In this issue of Focus, we address the Spy Government (“Gobierno Espía”) case and the difficulties presented by the lack of independence of the prosecutors’ offices to investigate human rights violations. We present profiles of two human rights defenders: María Herrera, a victim and organizer in search of her forcibly disappeared children, and Misael Zamora, an indigenous environmental activist.

Findings of the report of the United Nations Special Rapporteur on the situation of human rights defenders on his mission to Mexico in 2017 are also summarized.

To this day, regrettably, people who were threatened or attacked during the past years continue to suffer risks to their physical integrity and new episodes of violence. The current administration thus has a crucial opportunity: to set aside the rhetoric and finally put an end to the pacts of impunity that persist. 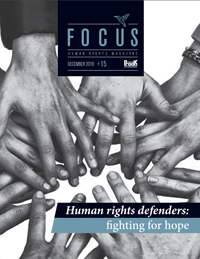