Speech of Olga Sánchez Cordero, Ministry of the Interior. 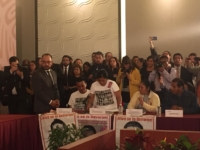 The enforced disappearance of 43 young students all at once. The execution of 6 people, including 3 students. The damage, irreversible in many cases, caused to dozens of men and women. Altogether, the Ayotzinapa case is one of the darkest episodes in the recent history of the country, a paradigmatic crime of the human rights and violence crisis that Mexico is facing­—an open wound in our country’s heart.

What followed the atrocious crimes of September 26, 2014, was an institutional response that not only demonstrated the worst practices of our criminal justice system, but also revealed a deteriorated political system.

First came the disdain of the federal government following an event that, despite its magnitude, was considered local and, therefore, jurisdiction of state authorities, letting the most crucial hours for the investigation of the disappearances pass by. There followed the federal government’s intrusion in order to create, hastily and by illicit methods, a version of events that was presented to the families of the disappeared and public opinion as conclusive, even if solid scientific evidence did not support it. Then, as had never happened before, a phase of international inspection took place, conducted by the Interdisciplinary Group of Independent Experts of the IACHR, which condemned the government’s actions in the case and opened new lines of investigation that had not been fully explored. Later transpired a long period of lassitude, and the case was simply politically administered. This negligence transformed into new phase, in which formal accusations are being filed one by one before judicial bodies as a consequence of the irregularities in the investigation.

Throughout each of these phases, the parents of the young disappeared maintained, under the most adverse conditions, an honorable, steady fight, demanding justice and truth. Protesting and knocking on every door of all the government’s institutions, even standing outside this Ministry, in the open, they kept calling for justice. Thanks to this unceasing fight, supported by several civil society organizations and groups in Mexico and abroad, and especially thanks to the international supervision conducted by the UN and the IACHR through the Special Follow-Up Mechanism, they could endure four years of lies and impunity. Today, they are here, on their feet, together.

They have made it to the present, when a government transition, which we hope will engender a real change, has opened a new window of opportunity. After meeting with the parents of the disappeared students at Iguala as a candidate and at the Memory and Tolerance Museum as a president-elect on the fourth anniversary of the events, for his first official act, President López Obrador met the families at the National Palace and announced that he would issue a Decree ordering the whole federal government administration to contribute proactively to the elucidation of the case. The Decree also formalized the order given to the Undersecretary of Human Rights of the Ministry of the Interior, who would be in charge of the Commission created pursuant to said Decree, to supervise the compliance with the order. Today, right now, this Commission is being set up.

The Commission faces a major challenge: breaking the pacts of impunity that hinder a full understanding of the events in the Ayotzinapa case. Although that task may be challenging, in order to perform it, the Commission has the support of the President; a clear, legal order arising from a Decree; the leadership of the Ministry of the Interior and an Undersecretary of Human Rights who are both deeply committed to the human rights agenda; and, notably, the active participation of the relatives of the disappeared students. Additionally, the Commission has the support of the Minister of Foreign Affairs to make use of the necessary international technical support, as well as of the Finance Secretary to allocate the necessary financial resources.

As has been said before, this Commission does not intend either to replace or to invade the functions of the prosecutor. The criminal investigation, which we hope will soon be conducted by an independent, efficient prosecutor, will continue. There is still a lot to be done, including the creation of a specialized body that complies with the requirements of immediacy, effectiveness, autonomy, and neutrality that the First Collegiate Tribunal in the state of Tamaulipas ordered with its innovative judgment. As this tribunal pointed out, the Ayotzinapa case indicates that, in Mexico, prosecutors usually work under the pressure and with the illegitimate interferences of political power; therefore, the duty of this Commission will be to remove the obstacles encountered during the investigation and prevent new ones in the future.

In order to achieve this, the Commission will not start from scratch. It will draw upon the fruitful work of the IGIE, the IACHR, and the UN; the Argentine Forensic Anthropology Team; the psychosocial examination of the families; the relevant information contained in the case file of the National Human Rights Commission; and, by implementing pioneering frameworks, the information provided by individuals who know useful details but have remained silent until now. The paths to follow are, in this sense, clear and publicly known: ascertaining the macro-criminal collusion that extended not only at a local level in Iguala, but also at a state and federal level; investigating buses as a means of international drug trafficking; making an extensive use of forensic services and latest technology.

But most importantly, the main task will be ascertaining the whereabouts of the students and what happened to them. Their parents have clearly stated it: they do not demand a convenient truth or reject specific versions of events because of the pain they cause. They are not impertinent or obstinate, as they have been constantly called. They are not moved by a desire for revenge or animosity towards someone in particular either. What these parents demand is the truth, no matter what it is.

Discovering the truth in the Ayotzinapa case is not only a debt owed to these brave families, but also an opportunity to prove that Mexico is not doomed to lies and impunity. In this regard, if the Commission achieves its goal, many other families that ask for justice too will feel encouraged. The crisis of disappearances, as Undersecretary Alejandro Encinas recognized before the IACHR, affects thousands of families around Mexico. Families like Maria Herrera’s family, who searches for her four sons and who is here with us today, as a deeply kind gesture. To these families, united in pain and dignity with the disappeared students’ families, making progress in the Ayotzinapa case can reinforce their legitimate demands, which include making real progress in their investigations; strengthening the search institutions and policies for the disappeared; carrying out the emergent plans necessary for the pending forensic work in a Mexico full of mass graves, as well as other extraordinary measures.

Mothers and fathers of the disappeared: throughout these four years, you have always fought your own battle. Walking all around the country, you have given Mexico a lesson in dignity. But only you, and those like you, who also search for a loved one, know how the absence of a disappeared person feels. Only you know what it is like, going home day after day without anything certain, while months, years pass by. Feeling this pain, you have said that you do not trust the government anymore, which is understandable, that your trust will only be recovered with specific steps—today, we are a step closer. While taking this step, we recognize the faces of Abel, Alexander, Adán, Abelardo, César Manuel, Antonio, Benjamín, Bernardo, Carlos Iván, Carlos Lorenzo, Christian Alfonso, Cutberto, Dorian, Christian Tomas, Giovanni, Everardo, Felipe, Emiliano, Jorge Luis, Jorge Antonio, Jonás, Israel, Jorge Aníbal, Jesús Jovany, Jorge, Israel, José Ángel, José Luis, José Eduardo, José Ángel, Leonel, Luis Ángel, Magdaleno Rubén, Jhosivani, Julio César, Luis Ángel, Mauricio, Miguel Ángel, Miguel Getsemany, Marcial Pablo, Marco Antonio, Miguel Ángel y Saúl. We also see Julio César, Daniel, and Julio César. Aldo and Edgar too. Because of them and many others, who have a name and a face, we reassert our commitment to do everything within our power for this Commission to give you access to truth. Because of them, but also because of you and the example you have given to us throughout these dark years, after which, today, hope starts to be instilled into us.

The Ayotzinapa case is a grisly, dark cauldron of all the things that must change in Mexico. It is a sign of the damage caused when corruption, human rights violations, and impunity are tied together. In order for this new effort to bear fruit, we need unwavering political will translated into specific actions. The pacts of impunity will not be broken overnight. There is no room for false expectations. What is about to come will not be easy, but we hope that the work we have been coordinating will be continued and will come to fruition without affecting our autonomy and ability to criticize as civil society organizations. Together with the parents of the disappeared, and as the poet Efraín Huerta wrote, we will keep working to make “the immense dream of a homeland free from crime” come true.