Sergio Sánchez Arellano sells candy and lives in the State of Mexico, where he has five children ranging in age from 10 to 16 years old.  Sergio, a Mazahua indigenous person, was accused of first degree murder and attempted robbery in a trial filled with irregularities on top of violations of several of his human rights, such as the rights to freedom and personal integrity, due process, presumption of innocence and access to effective remedy.  After a thorough analysis of his criminal file we can confirm that we are looking at a prime example of use of the justice system to falsely accuse a fabricated culprit.

Since March of 2010, Sergio has been facing an unjust process that originated in violations of his rights to freedom and personal integrity.  It was further flawed by having at its sole support one person’s false testimony given in anomalous circumstances.  As a consequence, Sergio was sentenced to 27 years and 6 months in prison.

A direct appeal sentence was handed down that clearly violated his human rights.  This appeal annulled the statements by an individual that identified him but then deemed sufficient evidence that the same person reaffirmed their original statement.  Sergio presented an application for judicial review which was examined by the First Chamber of the Supreme Court in Minister Norma Piña Hernández’s presentation under registry number 7464/2016.  The High Court found that the collegiate court should nullify all evidence derived from the illegal identification and any others that refer to it; it also specified that remaining evidence should be reviewed based on the principle of presumption of innocence, which means that if there were any doubts as to his participation, Sergio should be acquitted.

On February 1st, 2018, the First Circuit’s Ninth Collegiate Criminal Court granted Sergio an outright writ of amparo, recognizing the lack of evidence against him.  This decision resulted in Sergio Sánchez’s immediate release. 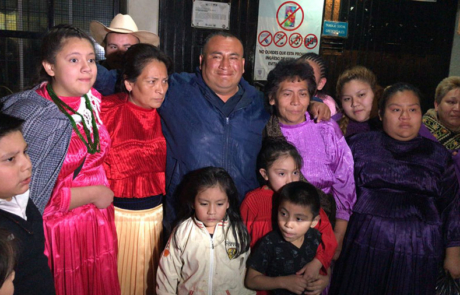 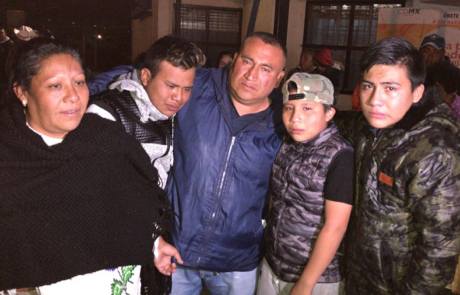 I. Irregularities and violated rights

Sergio Sánchez Arellano was arrested on March 29th, 2010, at approximately 8:00pm.  8 or 9 unidentified people took him, without an arrest warrant, while he was working.  He was brought before a judge on March 30th, 2010.  In the time between his arrest and appearance in court, he suffered physical abuse and was threatened with a firearm to confess to the crime he was accused of, which he refused to do.

According to the report, he was arrested on March 30th and on March 31st, the supposed sole witness gave her statement.  However, the arrest occurred at least 28 days after the crime attributed to him; the report states that the arrest took place due to an identification made by this witness, who was accompanying police on a routine patrol during a normal day.

After the arrest, on March 31st, 2010, at 5:25 am, the Public Prosecutor issued an urgent arrest agreement based on evidence obtained as a direct result of the arrest: the statement of the arresting officer, his presentation before the Prosecutor and the testimony of the sole witness.

The arrest was illegal because there was no arrest warrant, no flagrancy, and the urgent case assumptions were not updated when the agreement was issued after his arrest.

Identification proceedings were carried out on March 31st, 2010.  The text from these proceedings indicates the following:

Being proceedings in which Sergio was allegedly identified, but in which there was no legal defense present that would guarantee respect for his rights, this identification is annulled.  Because there is no legal certainty that the witnesses or complainants were effectively present, nor that their identification of him was not coerced, he was left completely defenseless.

In the casefile, there were approximately 40 pieces of evidence, including photographs, chemical, toxicological, and injury exams, among others.  From this collection of evidence, only the following have any possible connection with the events considered criminal and the criminal responsibility attributed to Sergio Sánchez Arellano:

It therefore follows that the only piece of evidence against Sergio is the statement of the person who identified him, which is not supported by any other piece of evidence taken into consideration by the judicial authority, since these only show that a crime existed, but not that a specific person committed it.

There is also a police sketch made on March 25th 2010 – that is, 23 days after the events in question and, most importantly, also based on the isolated statements of the sole witness.

Another irregularity and fundamental violation in this case is that the implausible, contradictory and illogical statement of the person who identified Sergio is the only piece of evidence against him, and is not supported by any other kind of evidence.  This is why it is not possible to convict him based on this identification, just as the Supreme Court has held in several precedents.

Likewise, during the entire process, evidence has been evaluated in an uneven manner on at least two occasions.  1) Analysis of the incriminating evidence and defense evidence is notably uneven; the former are given full probationary validity under simplistic, declarative reasoning lacking further analysis or argument, while the latter have diminished probationary value for reasons that have no legal basis, based on the phrase “defensive arguments”, the contents of which also do not have any normative foundation.  With respect to 2) the presentation of accused and accuser, the judge grants greater value to the statements of the person who identified him than to other statements such as those of Sergio’s wife, who stated that she was with him on the day in question, since they work together, or those of a neighbor who stated that he saw Sergio on that day as well.  The judge did not explain the legal basis or motives for doing so.

Moreover, defense evidence was not taken into account that analyzed the mechanics of the events.  It is concluded that the sole witness’s statement is clearly precise with respect to the time, manner and mechanics of the events in question, by walking behind individuals that are committing a crime, which does not correspond to natural behavior in these kinds of events.

In conclusion, the only piece of evidence against Sergio is this person’s statement.  Given the impossibility that her statement could be corroborated by any other means – that is, that there is no evidence that links him to the crime, her statement cannot disprove the initial presumption of innocence.  However, in this case there is, in fact, defense evidence which supports Sergio’s statement that he was at home on the day in question, and not at the place of the alleged crime.

The presumption of innocence has been repeatedly violated, since throughout the process there has been illegal and unequal evaluation of evidence, insufficient evidence, the sentence is based on a sole witness, and in general, it put the onus on Sergio to prove his own innocence.

With respect to her appearance in the process, the case file states that the preliminary inquiry was opened on March 2nd, 2010 on the day of the homicide.  23 days after the homicide, this person voluntarily gave her statement on the events at the invitation of investigators; finally, it was in one of the “patrols” with local police that she supposedly saw Sergio Sánchez Arellano in the same area where the homicide occurred, at which point he was illegally detained, according to the official version.

An official document is known to exist that states that the sole witness was removed from her job in the Administration and Staff Development area in the State of Mexico’s Educational Services Naucalpan Regional Services Subdirection.  The reason for this was that, in order to justify various work absences in June of 2010, she presented documents from the MH-1 Coordination of the Miguel Hidalgo Delegation Prosecutor’s Office (under the Attorney General of Mexico City), specifically stating that she had been called to testify in that office.  However, when Educational Services requested further information, they discovered that the official documents had been altered.

It should be noted that the preliminary inquiry against Sergio took place in the same MH-1 Coordination office that issued the document that this witness altered.

1 We have a sole witness when, even when there is more than one witness to the commission of a crime, the accusation lies in the statements of only one of them, for reasons such as not having appeared in court or in an inefficient investigation process.  In this sense, a sole witness is insufficient by itself and needs other sufficient data to demonstrate full criminal responsibility.

See: Amparo Directo 14/2011, resolved on November 9th 2011 by the First Chamber of the Supreme Court of Justice.