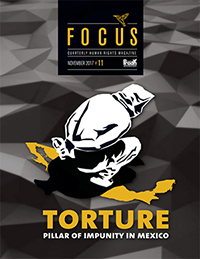 The struggle to eradicate torture in Mexico faces enormous difficulties.

The generalized, persistent, and unpunished use of torture is one of the principle facets of the country’s ongoing human rights crisis and has been the subject of numerous expressions of concern from international bodies.

Unfortunately, torture is a mainstay of the Mexican criminal justice system, used with impunity by security forces as a routine tool of “investigation”.

In May 2014, the un Special Rapporteur on Torture, Juan Méndez, confirmed that torture continues to be generalized, used especially in the period between detention and the detainee’s first appearance before prosecutors. The Rapporteur expressed his concern over the use of sexual violence as torture, as well as analyzing violations suffered by groups in a particular situation of vulnerability, such as indigenous people and migrants.

However, impunity remains the rule. Despite thousands of complaints filed each year, from 2005 to 2013, available data point to only two final judgments for torture.

The government’s reaction to torture in recent years has been to seek to minimize the problem and “kill the messenger”, questioning experts who documented this problem and stalling on real efforts to address it. Only recently in June 2017 was the new General Law against Torture published, following approximately two years of intense pressure by civil society and survivors, who faced resistance from certain sectors of the government.

The new adversarial criminal justice system and the new law seek to reduce the prevalence of the historically common modus operandi arbitrary detention-torture-fabrication of illicit evidence-trial-conviction, as well as impunity for torture.

However, we must transform both practice and institutional design, as these currently foment torture.

In this edition of Focus we discuss advances and tools to combat torture, as well as the challenges we face, hoping that this discussion is useful to increase access to justice for survivors and their families.