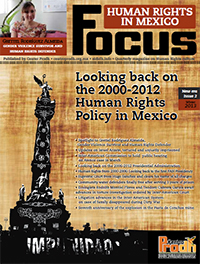 As 2013 begins, we reflect on the human rights situation in Mexico during the past twelve years, under the presidential administrations of Vicente Fox and Felipe Calderón of the National Action Party (PAN). These marked the only two terms in approximately the last 80 years in which the presidency was held by a party other than the Institutional Revolutionary Party (PRI). As of December 2012, the PRI has returned to the presidency once more.