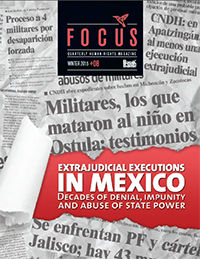 As our readers know, Mexico’s crisis of violence and serious human rights violations takes place against a backdrop of territorial disputes between rival criminal organizations. The government’s official position is that it fights against these organizations in a “war against crime” whose different parties are perfectly distinguishable.
The reality, exemplified in cases such as Ayotzinapa, is that Mexico’s near-total levels of impunity stem largely from the complicity between government and crime, especially in certain regions where the line between these two groups does not exist, with authorities working for organized crime groups. This context of macro-crime, not only at the municipal level but also with complicity by state and federal authorities, shows the clear link between corruption and human rights abuses today.
Macro-crime claims thousands of victims throughout Mexico’s territory. The media, academic investigators, civil society organizations, and thousands of everyday citizens denounce the wave of executions, enforced disappearances, torture, extortion, and kidnappings that afflict our country.
The government, unfortunately, is not taking appropriate actions to tackle this problem. The few criminal investigations launched into the most high-profile cases avoid taking into account the context of macro-crime and fail to recognize the responsibility of authorities. The most that is ever done, and only when there is an especially high level of public outcry, is to put low-ranking public servants on trial, even when it is clear that criminal responsibility originated at higher levels.
Center Prodh calls for ongoing initiatives such as the drafting of a General Law against Enforced Disappearance and the reform of the federal Attorney General’s Office to tackle macro-crime as an essential component of the crisis unfolding in Mexico. We insist that it will be impossible to advance towards truth and justice for thousands of victims with our eyes closed to this cycle of criminality.
Download
Webmonster2018-06-08T00:32:18+00:00enero 6th, 2016|