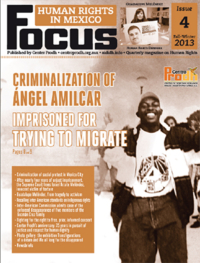 In this issue of Focus, covering fall and winter 2013-2014, we examine several topics that are crucial to understanding the human rights situation in Mexico today. Among these is the right to protest, which is increasingly under attack not only in numerous states but also in Mexico City (The Federal District), where a local gocvernment that presents itself as progessive has shown a striking tendency to repress citizens who protest against the federal administration, controlled by the PRI party.